Our Festival is mostly all out doors!  The City of Yukon has asked that no pets attend the festival this year! Service animals are allowed but not in the Oklahoma Czech, Inc. building. 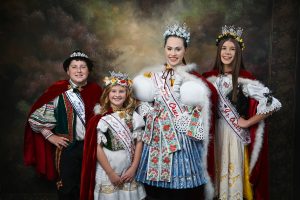 Who is the Oklahoma Czech-Slovak Royalty?

The Oklahoma Czech-Slovak Royalty represents and promotes the Oklahoma Czechs, Inc, and the Oklahoma Czech Festival which takes place the first Saturday of October in Yukon. Royalty consists of Queen, Junior Queen, Prince, and Princess.
*
Contestants must be Oklahoma residents of Czech-Slovak descent or legally adopted by parents of Czech-Slovak descent. Age categories are as follows: Queen, age 17-25; Junior Queen, age 11-16; Prince, age 5-10; and Princess, age 5-10. Contestants must be within these age ranges on August 15 of the current year.
*
For more information, contact Debbie at okczechslovakpageant@gmail.com.
* 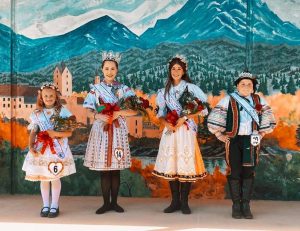 To order the 50th Anniversary History Book of the Czech Festival
Please write a check made out to Oklahoma Czechs, Inc
Mail to:
Marilyn Berousek
3408 Windsor Blvd
Oklahoma City, Ok 73122
The cost is $20.00 plus $2.75 postage 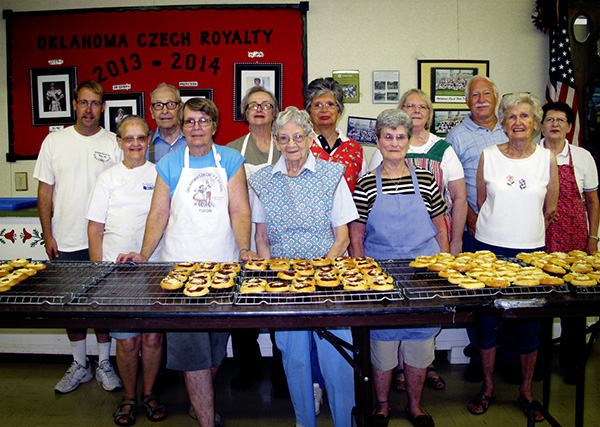 Cook sweetened apples in small amount of water until thick. Flavor with cinnamon or grated lemon rind. Add a pinch of salt and 1 Tablespoon butter for each cup of apples. Blend.

Mix ½ cup sugar (or powdered sugar), ¼ cup flour and 1/3 cup butter with a pastry blender until crumbly.  Sprinkle on top of kolace before baking.

The origin of the polka goes back to 1830, to the town of Kostelec, Bohemla, where a young glrl, named Anicka Chadlmova, while taking care of her master’s children, teaching them to sing and dance, invented her own dance in 2/4 time. Soon the village heard about this, including the village teacher Josef Neruda. He was the first to write the tune down in music and called the dance “Pulka”, which means “half” (of 4/4 time) and “krok” which means “step”. Soon the Pulka got to be called POLKA, the same as today. Its popularity was introduced to Prague about 1835, and in 1839, was brought to Vienna by the musical band of the Prague Sharpshooters, a military unit. The music and dance met with extraordinary acceptance. .In 1840 it was received with tremendous applause at the Odeon Theatre in Paris and was soon the favorite dance at all the private and public balls. It spread rapidly into every country of Europe and is now popular allover the world. It was brought to America by the immigrants. It survived many other dances-and is much danced today, 179 years after its invention. The polka tempo is much used by Czech composers, but is not found in the works of classical Polish composers nor those of other nationalities. Websters New World Dictionary of the American Language says:  “POLKA -Czech ‘pulka’ -fast dance for couples, developed in Bohemia in the early 19th century.”

As often is the case, Anicka Chadimova did not benefit in any way from her dance step. After an unhappy marriage, she died as a pauper. The teacher, Josef Neruda’s life was also unhappy, and during the night of April 8, 1876, was murdered in his home. The murderer was never found.

The Beer Barrel Polka comes from a Czech love song by Jaromir Vejvoda, of Zbraslav, Czechoslovakia named “Škoda Lasky”. The words to Škoda Lasky are of a sad love song. The Beer Barrel Polka was brought to England by Czechoslovak airmen during World War II. The translated lyrics became General Dwight D. Eisenhower’s favorite melody. He had the author come to England to thank him personally for the morale building effect of the song.

George Miskovsky Band played before WWII.  Much of the music used today has hisname stamped on the front of the sheet music.

Milo Belsky and his brothers started playing after brother Joe got out of the Army. Joe played alto sax, Milo played trombone, and Charlie played sax and trumpet. Paul Smith started playing trumpet with the band when he was fourteen years old. Charlie picked him up and drove Paul to the dances. Jerry Kaplan played tenor sax and accordion, Jim Masopust played drums, and Speedy Walker played piano.

The Belskys owned a refrigeration manufacturing business and many floral units, walk in units and beer cases are still working. When Milo’s trombone slide was sticking, he just poured beer down the tube and the slide started working.  He drank the rest of the beer. Milo obtained the baby grand piano from the officer’s club at Fort Sill in Lawton. It is still used today on the Czech Hall stage. After brother Joe passed, Milo retired and Charlie Belsky directed the band. He later called the band the Polka Stars.  Then in 1958, Jerry Kaplan directed the band and changed  the name to the Jerry Kaplan Orchestra.  His daughter Joyce played piano and was the vocalist.  John Simpson ran the band after Jerry passed.

In 2004, Milo Shedeck took over the band and named it The Bohemian Knights in honor of Toni, Charlie Belsky’s widow. Milo plays sax and clarinet. Milo found a world class accordion player named Dick Albreski and his band can play all types of music with most of the sheet music arrangements done by teacher and accordionist Albreski.  He is originally from Erie, Pennsylvania. His other players are: Kenneth Leck on drums, Mike Nielsen and Mark Guinn on trumpet, and Neal Hickerson on tenor sax.  His other players have been Paul Smith, Mike Forcina, Cory Johnson, Scott Shedeck  and Bob Bright on trumpet, Tim Hanna on tuba, Scott Rohr on drums, and Ken Elliott on tenor sax. Milo Shedeck also played in the Belsky, Kaplan, Vitek, and Masopust bands.

Other local bands that have played at the Czech Hall have included: George Miskovsky, Bob Vitek, Ed Novey, Ernie Divis, John Simpson, Charlie Rolivich, and Bessie Masopust .  Paul Smith played in all the above Bands except the original George Miskovsky Band.

Holy Wednesday  Czech and Slovaks call the Wednesday of Holy Week, “Ugly Wednesday”.  There is superstition that anyone eating honey on this day will not be stung by serpents.  The church bells are muffled, their place being taken by great wooden rattles in the church towers.

Holy Thursday  In Czech Republic, Holy Thursday is called “Green Thursday”.  The hawthorn is supposed to weep on that day; according to tradition, it is the tree from which the crown of thorns was fashioned. Parents send their children to the brooks to bathe on Green Thursday; it is a cure for laziness.  At breakfast the Czechs and Slovaks eat honey and “Judas cakes, cakes twisted like rope.

Good Friday  Holy Friday is known as “Great Friday” in Czech Republic.  On that day anyone can look upon the sun without being blinded by its glare.  Moveover, all hidden treasures are revealed to those seeking them before sunrise.  An ancient ballad tells of a woman who went before sunrise of Great Friday to a mountainside.  The rocks opened and she beheld quantities of shining gold.  Hastily laying down her child, she filled her apron with gold and then ran home for a larger vessel to hold more treasure.  By the time she returned, the sun was up and her child was shut up in the mountain.  A year later she returned to the same spot before sunrise; the mountain opened and she found her child alive and well.

For Good Luck  In a new home the Czech people plant rosemary and oleander at the front door for good luck.

Czech Fortunes  In Czech Republic, fortunes are told after dinner on Christmas Eve.  Melted wax or lead is poured into water and the shapes they form are the signs that foretell the future.

Where Is My Home?

Thunder over the Tatra Mountains

Our Czech songs so endearing
They are so sweetly alluring
Just like the flower let in the spring
Blossom our songs to a joyous swing
And if we should lose this flower
Nothing in life would remain
If our songs perish
We’d lose all we cherish
Living would then be in vain.